Anchor.fm just released version 2.0 of their app. They claim it’s a new form of radio and I have to admit, it’s quite nice and it lets you build your own virtual radio station. It lets you record snippets and publish them to your own station. You can add music too. And you can make a call-in to another station which the owner of that station can then put on their own station.

I was planning to use Anchor as a side-channel to my main podcast (TFTTF) – to release a daily photo tip for my audience and answer questions that they submit as call-ins to my Anchor station.

In addition I wanted to re-use my Anchor content on TFTTF. 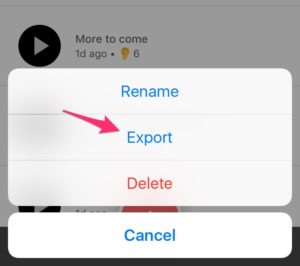 a) Anchor lets me export my own content, but the export quality is horrible.

In fact it sounds so bad, it doesn’t even come close to what I find acceptable for my podcast. I do make exceptions if it’s really good content, but only occasionally and only if it’s not every single week.

b) Anchor will not let me export the wonderful call-ins that I receive from the audience.

Call-ins are the very soul of my podcasts. Hearing listener’s voices is not only great content, it also makes the show so much more valuable to everyone else who listens. It gives people the feeling they are not alone with their questions. It’s a major identification point for the audience.

Anchor won’t allow the export of those. No reason given. It just won’t do it. Which makes it close to impossible to use Anchor content on my shows.

Too bad, I had really hoped they’d get it right this time around. Instead they remain tightly clasped to the idea that allowing content to be used outside their ecosystem might hurt them in some mysterious way.

My prediction is the complete opposite: if Anchor.fm allowed the content of a station to be freely used with good quality outside their walled garden, podcasters would instantly become their biggest recruiting army. Every single podcaster is looking for a great audio feedback channel into the show and if that feedback channel existed, podcasters would tell every single one of their millions of listeners to download Anchor and use it to send feedback into the show.

I don’t get why Anchor doesn’t see that that’s a huge potential for synergy and growth.