Here’s my new hot/cold wallet setup. After a few days of testing I based it on Bither which allows for a cold/hot wallet setup on two separate devices and which is available for both iOS and Android. 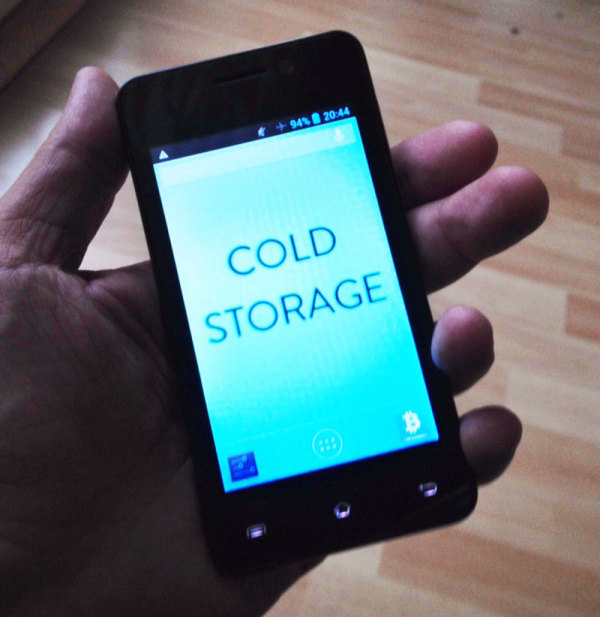 My hot wallet (Bither in hot mode) runs on my iPhone. I keep some bitcoin change on that for small every-day payments.
My cold wallet (Bither in cold mode) runs on an unlocked (MySaga C1 entry-level) Android phone that I just bought new for that exact purpose. It set me back € 65 including shipping.
The Android phone that holds the cold wallet is offline. Wifi off, Bluetooth off, Airplane mode on. All it does is run an offline Bither cold wallet. That’s its only purpose. It is locked away until I need access to some of my cold wallet funds. In addition it’s locked with a strong password. I’m not planning to take this device online. It holds the private keys for a cold wallet and if I ever need to transfer money from it, I can use Bither on the iPhone to create an unsigned transaction, send that over to the cold wallet via camera & QR code, sign it there in offline mode and transfer the signed transaction back through another QR code. Taking it online would defeat the purpose. Even the cold wallet keys are created with the device being offline. They never leave the system. They never get exposed to the net.
Right now I’m waiting for a few minor Bither improvements (exporting of private keys, better wallet management) before I add more funds to the system, but the devs seem responsive enough and they know that they have a great solution on their hands. This system offers the best of two worlds: the security of an offline system (it’s offline, which makes it exceptionally hard to steal your private keys) while providing the convenience of an online system that allows access to your cold wallet with relative ease.
I like it!
(PS: any ideas how to physically disable the net on this phone?)